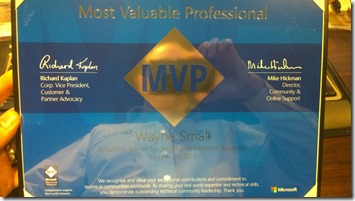 Last week, I got the news from Microsoft that I was once again worthy of the MVP award for my community contributions and technical expertise on Windows Server for Small and Medium Business.  This is now the start of my 14th year of receiving this award from Microsoft and I’m one of only 43 in the world, and one of 3 here in Australia.

To be honest – the last 2 years, I’ve been starting to lose interest as I really felt that Microsoft was not interested in the SMB community or making products that suited our market space as much as they were before this point.  I was to the point of not even going to submit the information to Microsoft about the work I’d done in the community.  I was however convinced by an individual within Microsoft to keep on trying.  I felt through my discussions with him that things were going to turn the corner real soon now.

The frustrations I’ve had with Microsoft over the last few years have been predominantly around their change in culture of NOT releasing information prior to product release.  The internal and external policy was such that even us MVPs were not permitted to know what features would be in the next version of products for our market until the general public announcement.  This was frustrating because by the time Microsoft were ready to release it publicly, well it was then too late for us to weigh in with ideas for improvements, too late for any feedback we had to make a difference.  Too late for the feedback we had from the community to make a difference.  The end result in all honesty is that the overall desire to even be an MVP when we can make ZERO difference was frustrating.  Why carry a title when it means nothing… thats where I was at.

In the last weeks, Microsoft have started a fresh with releasing information on Windows 10 and the Server version as well.  Not only have they released this info to the public, but the communication to us MVPs has risen dramatically.  Whilst saying exactly what has been said to us would break my NDA, I can reveal that we’ve been specifically told that “yes there’s still time to get great things done…” and given “permission” to go forth in public forums to gather great ideas to take back to the team.  YES YES YES… this is what I’ve wanted.  To be able to make a difference.  To be able to help build a good strong product that seriously serves the needs of our clients and solves business problems for them.

Thank you Microsoft.  Thank you Jason Anderson for listening to us and not only hearing us, but taking our concerns up the food chain.

You’ve got me back… watch out world!