I got a few CPU alerts from my Windows Storage Server 2008 R2 Essentials over the last few days about high CPU usage.  I brought up Task Manager to check it out and found a process called WDFME.EXE was using up a large portion of it.  I did some googling and found that this was linked to the Western Digital SmartWare software that I had installed on the system as it came with a 3TB hard drive I was playing with.

Anyway – I found additional reports indicating that others had seen this problem – from all reports so far though it seems that the easiest way to resolve it was to terminate the software and remove it.  Below you can see the drop in CPU utilisation that happened once I terminated the process. 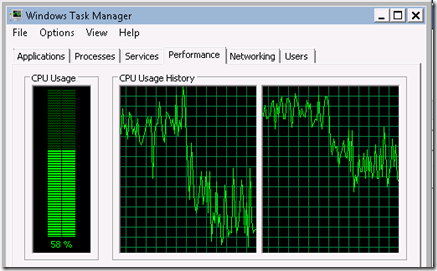 Anyway – based on the reports I’ve read – it appears to be a problem with the software at times and WD are still digging into it.