Trend this last week silently released another patch for WFBS 7.0 to combat issues people are seeing in the real world.  The patch is cumulative of the previous public released hotfixes and supersedes the 1370 patch (Trend WFBS 7.0 – Patch 1370 Now Available) released in December.

I found out about the patch via the WFBS Security Console.  This is a new feature in WFBS 7 that alerts you when there’s a new significant patch available.

What’s fixed with it?

There is also at least one undocumented new feature in this release.  The screenshot below from my server shows build 1370 – but you will notice the additional lines showing the hotfixes installed on this server – woohoo!  I’ve bee asking for that for years now and finally it’s good to see it there.

Where can you get it?

You can get the patch from here on the Product Patch Tab.

Installation for me on my production SBS 2008 server went without a hitch.  It only took a few minutes and it pushed out to the client security agents automatically.  I was not currently seeing any of the issues others have seen on this server, but I applied it anyway to check out what might happen.  If you are installing new sites, I’d recommend applying this patch ASAP as preventative measures.  Below you can see my servers status after the upgrade.  Note the Hot Fix History section which lists all applied hotfixes to the server. 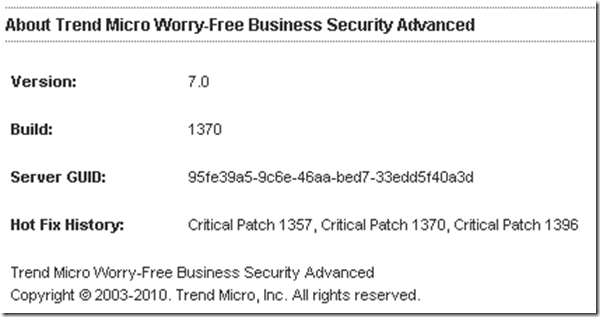