I’ve landed my first book on my own being the SBS Cougar Administrators Pocket Consultant. Today is the first real day of writing for me focused just on this and it’s harder than I thought. Given that Cougar is not due out until “some time next year”, writing about a product that is still very much in the process of being built is not an easy task. Hopefully I’ve made it easier for myself and I’ve chosen to get my first chapter out based on the SBS console itself – something that I hope should be fairly well baked at this point 🙂 I probably should not say anything more than that though as my NDA might suddenly rip me to shreds.

Anyway – here’s the preliminary cover of the book due out around the time that SBS Cougar is available on the shelves next year! That’s about all I can say as the NDA comes into effect from this point forward. 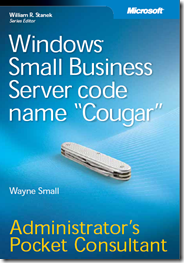