On one of my servers, I got a low disk space alert today for the C: drive. This server hosts a number of websites including this blog so I was somewhat puzzled as to what would consume so much space. The C: drive on this server is 30GB in size. I use a freeware utility called TreeSize Free to determine where the space is – it’s a cool utility and allows you to drill down into folders to see what is taking up so much space.

Here’s a screen shot of it 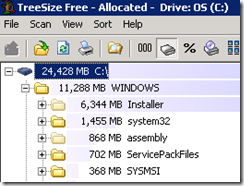 You can see I’ve got 6.3GB taken up in the C:\Windows\Installer directory.

I checked inside the directory and found a heap of duplicate files. Those 466MB duplicates are sucking up space big time. Ok – so the cowboy in me says go delete them and see what happens. The IT Professional in me says that I need to find out more about what they are and why there are duplicates BEFORE I delete them. So off to Google I go and within the first few hits I find out that they are files left over from the installation of various programs. I “could” delete them but there may be unspecified side effects if I do. I found a Microsoft KB article which references these files and a supported method to remove them IF they are left over from failed uninstallations

So what did I do? I decided to backup the lot and then delete them. So far no noticeable side effects from this, although talking to a few people I may notice issues when I go to remove a program in the future – it may require one or more of these files in order to uninstall correctly. To be honest, I’m not real happy that I had to go the cowboy route on this one – but with 4GB of disk space being chewed up but the big files, I didn’t have much choice. If you know of a better way to have handled this please let me know.