One thing I saw at MVP summit that I was not aware of was the cool way that I can use my Xbox 360 + Kinect to do video conferencing.  VideoKinect allows you to video conference with anyone with a similar setup or any of your MSN Messenger contacts.  The screenshot below gives you an idea of what it looks like – I’ve masked out the other people for privacy, but you could see them as clearly as you could see me.

The Kinect can use it’s functionality to auto zoom in on the people talking and then back out once they stop.  You see below it’s got one of my couches on screen, but when it zoomed out you could see them both quite easily – great way for families to connect to each other on opposite sides of the planet!

How cool is this huh?  From the comfort of my own lounge room I can conduct video conferencing that in the past would have cost many thousands of dollars to do. 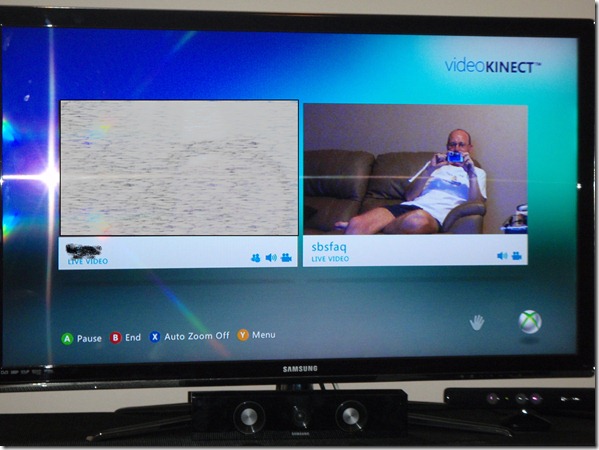 How can you setup VideoKinect?

First up connect your Xbox 360 to the Internet via the inbuilt wireless adapter or cable connection.

Once you’ve connected to the internet dig into the Xbox to find the VideoKinect application – it then retrieved a number of updates for the app and rebooted the Xbox 360 a few times.

Once you’re online with your Xbox Live, you need to associate your MSN ID with your Gamertag.

Then you can sign in and run from there – pretty simple and all up took me about 30 minutes to do.