I attended the training today in Sydney on StorageCrafts most current product releases.  During the training I decided to remotely upgrade 2 of my ImageManager 4 Installations to the newer version now called ShadowControl 5.  I’d love to say that the installation went without flaw, but sadly that’s not the case.  In the two installation I’ve upgraded so far, both of them lost the settings that were there entirely.

One of my installations also had some activated licenses for the FTP replication function, and I had to reactivate those – that didn’t bother me to be honest, and I expected that something like that would likely happen.  What bothered me the most is that all the Agent settings, Email Settings, and the managed folders all disappeared.  I was left with a screen like you see below.

Ok – lucky for me, these systems are two of my low use production systems, and not one of my high use system.  I talked to Jack Alsop about it after the event and his comment was that he had not seen this himself, but it was possible given the change in name of the product.  Jack suggested I might poke around in the Registry and try to export the old keys and import them into the new ones.  Fair enough I thought – I can do that.

Below you can see the entries for the new upgraded version – note that this is under CurrentControlSet and note that the product name for the registry entry has changed.

Before exporting and importing though I thought I’d take a look at one of the systems I reconfigured from scratch and found the structure is different enough for me not to want to try messing with it.  I’ll be digging into this with StorageCraft but for now wanted to post my findings so that others would be aware of the issue that I’ve seen and at least take a few moments to document the settings you have in case things don’t go according to plan. 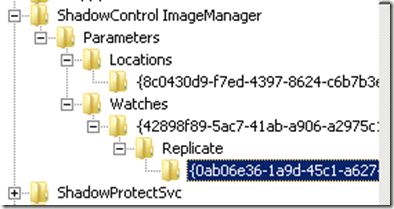 Ok StorageCraft – I really hoped you would handle this better you know… I mean you know that I’m running a previous version – if you are going to lose the settings then at least provide me a way to back them up.  I’m a little nervous to be honest about messing with the registry like this and for now – I’m waiting till I can get assurances from StorageCraft that this issue has been fixed. I don’t fancy having to reconfigure some of our clients systems with a dozen managed folders manually.