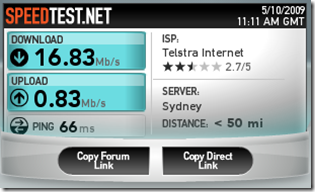 I ve lived in my current house for 11 years now, and we ve had ADSL for the past 5 or so years but we are running off a RIM exchange and therefore I ve had many many applications to move to ADSL2+ rejected due to this. A mate of mine suggested that I should give Telstra a go for my internet connection. I have a big issue with giving Telstra a go their pricing is highly monopolistic. Ultimately though I decided to bite the bullet and applied for a Liberty 12GB plan from them. We put the application in around 2:30pm on Tuesday and by 4:00pm THAT DAY we had received an email indicating that the service was already provisioned. Amazing I thought surely they can t work that fast, so I left it until tonight to change over. I took my current DSL connection, switched the phone line on it and changed the userID and password seconds later I was up. Next thing is to run a speed test using www.speedtest.net. The results speak for themselves! WOW! Now I can cancel the other DSL connection and also the phone line it s connected to. All up I ll save around $30/month not a lot, but hey it all helps!