One of the cool things behind the new SBS Aurora is the new look console that is extensible in so many ways.  Here’s a few screenshots to give you an idea of what is coming.

You can see this looks pretty much like the current SBS 2008 console which is a fair call given it’s basically a product refresh under the covers.  It has the same extensibility as the SBS 2008 console as well.  You can add alerts and custom options in the Security section of the console and thats about it. 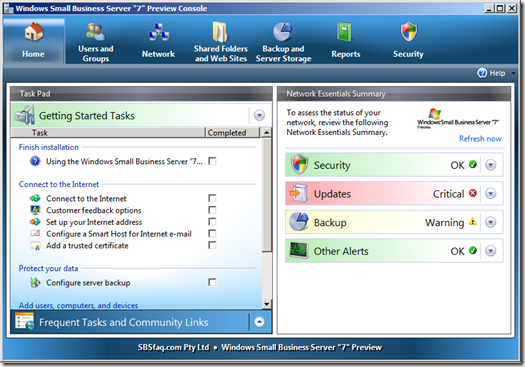 This console looks new – brighter, and more user friendly and that is because it’s not aimed at us IT Professionals – it’s aimed fairly and squarely at the end user.  Microsoft are thinking that the end user will be one of the key people driving this type of console and therefore they want to make it as easy as possible for them to drive.  They also want to make it easy for ISVs, OEM and Software Vendors to add functionality to the console and have made it far more extensible than the SBS 2008 / SBSv7 console is today.

And for the sake of completeness, you can see the upcoming Windows Home Server codename Vail console.  It looks like the Aurora console and in fact both products are built off the same code base.  Therefore the functionality that exists between them is consistent by and large. 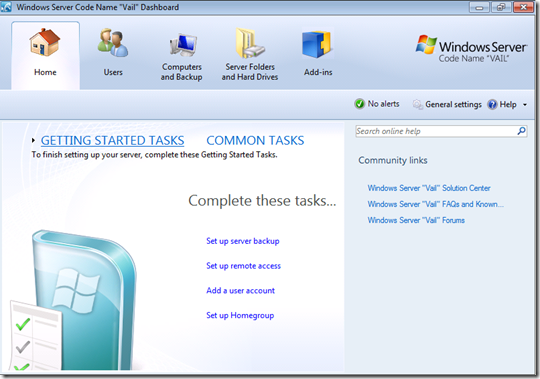 NOTE: ALL SCREENSHOTS ARE OF BETA PRODUCT AND MAY CHANGE BEFORE THE PRODUCT IS RELEASED TO MANUFACTURING