Radek is a member who has been involved in the community for some time. His day job is with TLC IT Solutions, an IT reseller in Brisbane, and he also works with VMvault. Radeks knowledge of the VMWare virtualisation infrastructure is extremely solid and many in the community go to him when it comes to this :-)  Certainly I did – SBSfaq.com is actually hosted on VMVault technology and I could not be happier.

Who are you?  Radek Tkaczyk. Now that is pronounced Two-Car-Chick! 🙂

Where are you based?  Brisbane, Australia

What kind of business do you run/work in?  Among the many things I’m doing, I’m working for TLC and VMVault. I also teach IT at the Queensland University of Technology.

What type of clients  do you work with? Mostly SMB’s and resellers, but also larger companies with dedicated IT departments, and some government departments – eg. mining companies, councils and defence.

What’s the best thing you like about working with those clients?  Large companies are not afraid to spend money to purchase quality enterprise grade IT equipment, and have it implemented properly with a proper implementation timeline, and a budget suitable for the project. Small companies try and do projects with shoe-string budgets and use substandard equipment to keep costs unrealistically low.

What’s the worst thing you dislike about working with those clients?  The bureaucracy involved in dealing with a large company with boards that have to make decisions. Government departments are particularly bad, as so many people have to sign off on things, and that can mean a project appears to have stalled while it gets signed off. When dealing with small companies, you are usually dealing with the business owner, and can get decisions and sign offs pretty quickly.

What’s the next big challenge you think your clients face? The cloud movement. It’s taken the industry by storm, just as virtualisation took the industry by storm 2-3 years ago. I think the next couple of years will see a huge shift in the way many IT companies, and general companies use IT services. Microsoft, VMware and all the big IT companies are getting ready for this shift, so it will be sink or swim for some industries I think.

What is your favourite breakfast food?  Pancakes and ice-cream. I LOVE ice cream! When I was doing contract work for a mining company in Papua New Guinea I was nicknamed ice-cream boy, because every second day was ice-cream for desert and I kept going back for seconds and thirds! The food wasn’t the best up there, so I was making the best of a bad situation!

If you had a million dollars how would you spend it? I would be really, really boring and say invest it. Maybe spend a little, pay off my mortgage and invest the majority of it so that I can retire very comfortably.

If you could meet someone living or dead, who would it be and why? I would like to meet the president of the United States. As I think he is the most powerful man in the world, and I would like to have a discussion with him regarding how the US is viewed by the rest of the world (well at least the way I see it)

What was the funniest thing you have ever experienced?  At a going away function that was being held for me (I was resigning from where I was working), A bunch of us guys went down the pup to celebrate/say good-bye and one of the guys present was not really liked by anyone in the group. He was the BIGGEST nerd ever, and had all the stereotypic traits – skinny, pale white skin with coke bottle glasses to suit. He wouldn’t stop talking about his home ADSL2+ connection and how his ISP had a "slider" to adjust the settings, etc etc.  Each of the guys in turn would go do something (like get a beer, go to the bathroom, etc) to try and get away from him 🙂 You had to be there to see the funny side of it, but I was laughing so had that I started to cry! (hmm, yes you had to be there to get it)

What one thing has had the biggest impact on your life on who you are today?   My wife and kids. One’s family is always the biggest impact on anyone – above work, and all else. I’m lucky enough to have a gorgeous, wonderful wife, and two amazing kids – with a third one on the way. I wanted a total of two kids, my wife wants four, so we settled on three 🙂

What is something that not a lot of people know about you but you wish more people could know? That I have an Australian accent! My name is Polish and because its so unusual people may think that English is not my first language, and that I may have a strong European accent (the spelling of my surname sort of gives it away). I came to Australia when I was 4, so I consider myself a true-blue Aussie!

What kind of car do you drive & why?  A Red Mazda-3 Max Sport. It was the most suitable, well priced, well featured medium vehicle when I bought it. Its great for getting around and general use.  I also have a Toyota Kulger 4WD, for when I need to carry around large servers and SANs, and it’s a great people mover for the family.

What’s the one thing you want people to remember you for after you die?  I’d like to be remembered as a hard working individual who is trying to better the life of myself and my family by working hard and doing what I do well. 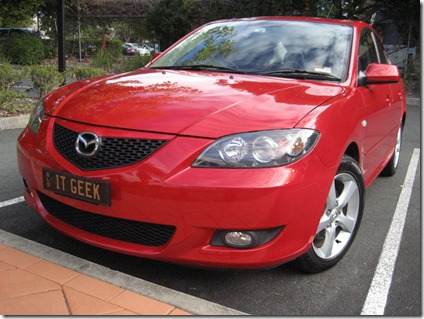