This is one I’ve heard a lot before and it’s easy to solve.

When you add Desktop or Notebook computers to SBS 2008 and SBS 2011 via the http://connect wizard, they get added in and put by default into the Client Computers OU inside Active Directory.  The SBS 2008 and SBS 2011 Standard console displays any computers in that OU under the Client Computers section on the console itself.  The screenshot below show you how this looks.

When you add servers to the SBS 2008 or SBS 2011 Standard network, there is no wizard to follow.  As such you add them to the domain in the normal manner.

SBS is configured by default to add any new computer to the domain in the SBSComputers OU as you can see below. 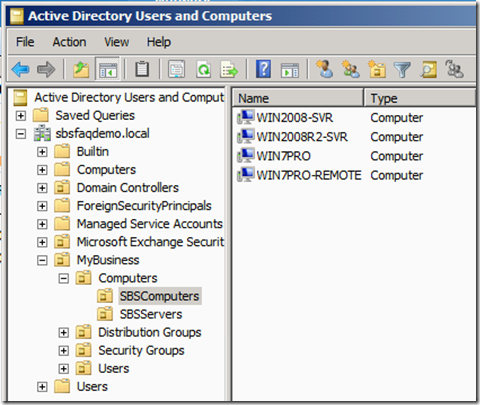 The solution is therefore quite simple.  Once you add your Server to the SBS 2008 or SBS 2011 Standard domain, you need to move them into the SBSServers OU using Active Directory Users and Computers.  Run ADUC from the Administrative tools group.  Select the computers you wish to move and drag them into the SBSServers OU as you can see I’m doing below.  You will get a warning also as below – select Yes to continue. 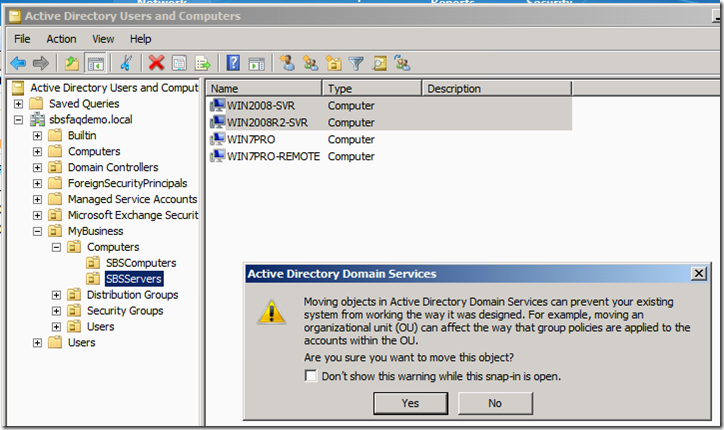 Once they are moved it will look like this. If you refresh the SBS console then it will all appear like it should as you can see below.