This weekend I m doing another migration from SBS 2003 to SBS 2008. As part of that migration I ve done my normal backup procedure and THIS TIME it proved WHY it s so important. Microsoft recommend in their documentation that you do a full backup of the system this is very good advice, but advice that I suspect few people follow. A full system backup with NTBACKUP will include the system state that s the bit with all your AD info and so on in it.

During a migration, I typically connect my own USB drives to the clients server and then regardless of their current backup, I do my own backups. I do two things here firstly an image level backup using ShadowProtect (we have the IT edition ourselves) and then secondly I use NTBACKUP to do a SYSTEM STATE backup to a file on the USB drive just by itself. I do this a few times during the migration process as it gives me a few points of recovery.

1st time is when I connect my drive to the server and BEFORE I make ANY changes that way I can recover the system back to this point in time if needed.

2nd time is directly I ve checked for and resolve the typical AD issues that we come across from time to time.

3rd time is AFTER I ve done the SBS 2008 preparation stuff on the server this will do some Active Directory schema extensions and I want to be sure to capture those after they ve happened.

4th time is optional and dependant on how long it is between doing the 3rd backup and starting the SBS 2008 migration installation. If I start the migration directly after the 3rd system state backup then I don t do a 4th backup however if it s been a few days in between then I do the 4th backup as it will capture any user password changes etc that may have happened in those few days.

Ok so today it showed up just how this process works and it saved me from a lot of pain and frustration. Yesterday I installed SBS 2008 in migration mode and the install went through without any major issues. However during the Windows portion of the installation process I got this error message when I configured an 80GB partition on the first set of disks

Windows requires a valid system volume for installation to continue. There is enough space on disk 1 for a system volume to be created. Click ok to create this system volume and to continue installing windows, click cancel to return to the previous screen.

Ok I must admit to not reading it properly and clicked OK. At the end of the SBS 2008 migration, SBS was happily installed in the SBS 2003 domain and it was only when I went to review the disk management console to create additional partitions that I was shocked to see the screen below. 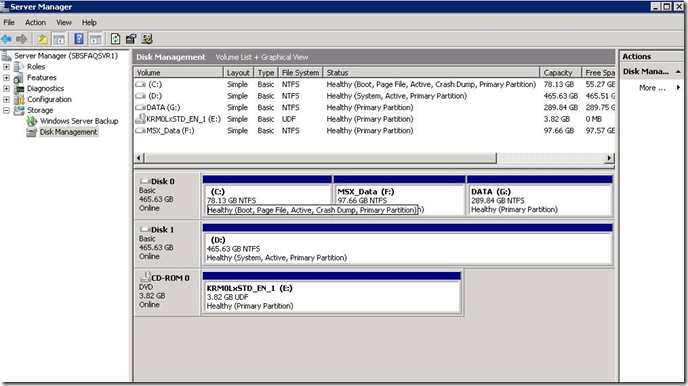 Can you see the D: drive it s actually the SYSTEM partition. What this means is that all the boot files that allow the system to boot up are on there NOT GOOD. Ok so I did some digging on the net to see what I could do and found quite a few good references to how to fix this using the BCDEDIT utility. I used BCDEDIT /ENUM ALL / V to list all options and then used some additional BCDEDIT commands to fix things. However nothing I could do would make the C: drive the SYSTEM partition. I even attempted to use ShadowProtect to resolve it all to no avail.

Clearly this is not something I could live with, so in the end I had to decide to back out of the upgrade. This is where the system state backups come in. I was able to take my SBS 2003 server, and restore the active directory without losing anything at all (except for the time it took for me to build the new SBS 2008 server, and mess around with it).

How do you do a system state restore? Easy if you know how.

Ok so that s the easy bit I m back to where I was before but why did I have the error message in the first place? After a bit of digging on the net, it looks like for some reason that my Windows thought that my first set of hard drives were not big enough for the system. therefore it decided to force me to put it onto the second set of drives. I did some testing with Window Server 2008 media (not the SBS once) and was able to reproduce the problem.

I solved the problem in the end by disconnecting the 2nd set of drives. Now when I boot up of the W2008 DVD, it will happily install to the 1st set of drives. Ok I m back where I started, a little wiser now 🙂

I ll give the migration another shot and post later how it goes.