I posted a poll a little while back about the name for the next version of SBS.  Microsoft will have their ideas, and as yet I’m not privy to what has been chosen.  I thought it was interesting to see what people were thinking on this front. 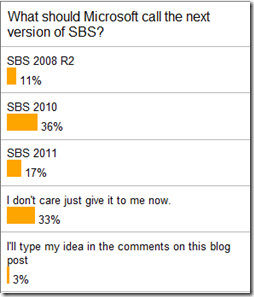 Most felt that SBS 2010 was the best name for the product and that was despite Microsoft not having announced a release date for it just yet, but based on peoples expectations that it would be released around 2 years after SBS 2008 was.  What I thought was interesting most though was the percentage of people that said “I don’t care just give it to me now”.

My biggest thought is WHY?  Why do you need it now? What fundamental features are missing from SBS 2008 right now that make THAT MUCH of a difference that you want it now? What is it that you need?