I’ve had the pleasure of having a WD Sentinel running in the SBSfaq.com office network here for the last 2 months.  The WD Sentinel was released late last year by Western Digital as their first device focused around Windows Storage Server 2008 R2 Essentials.  I’ve been given the DX 4000 model which has 2 x 2TB drives in it to review although they have other models as well.  The WD Sentinel DX 4000 is basically a NAS on steroids.  It’s based on Window Storage Server 2008 R2 Essentials (WSSe) and includes all the cool things that WSSe has to offer.  It’s designed to support up to 25 users for file access to the server as well as a pretty cool backup facility for up to 25 PCs or Laptops.

From the outside, the WD Sentinel DX 4000 has an LCD panel on the front with up / down controls, a power button, a few LEDs for status of the unit and the individual drives and a door to protect the hard drives.  The hard drives can be easily removed and installed without the need for any tools at all. In fact, Western Digital have even built in an eject mechanism into the drives to cleanly disconnect them should you need to remove a drive due to failure. 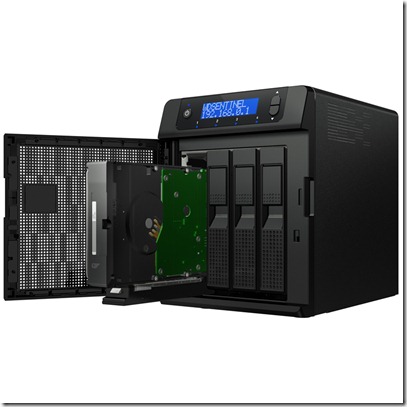 On the rear of the unit, you will find 2 power supply ports (only one power supply comes as standard), 2 LAN ports and 2 x USB 3.0 ports.  There is also a reset button that can be used as part of the process to restore this unit back to factory defaults. 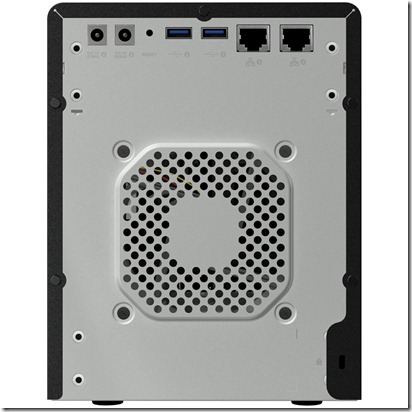 Out of the box, the DX 4000 requires no monitor, keyboard or mouse.  In fact there’s no where to plug any of those things in.  That’s because it’s designed to operate as a headless device from the start.  This is where it gets “tricky” as most SMB IT Professionals will expect to connect these things to it.  Simply connect the DX 4000 to your LAN, plug in power and within a few minutes it will acquire an IP address and display it on the front panel.  The paper quick start guide that is in the box works seamlessly guiding you through it.  It takes around 26 minutes to setup from this point, and once it’s finalised, it’s ready to go.  You can then add this to your domain if you have an SBS network or similar or leave it in it’s own workgroup – either way it’s easy setup.  You get access to the WSSe console from the desktop and can then see all the configuration options for it including setting up user access, shared folders and even monitoring things like the CPU temperature on the system.  Once it’s done, for the diehard SMB IT Professionals, you can connect to the server via RDP if you like and see it like a normal Windows Server.

Redundancy – the unit comes with a single power supply, but you can optionally purchase a 2nd unit and therefore provide a degree of fault tolerance not seen on low end NAS devices like this.  In addition, the 2 Network connections are teamed automatically to provide redundancy and will automatically use whichever one is connected without user intervention.  Depending on the unit that you purchase, you will have either 2 or 4 drives in it.  My unit had 2 x 2TB drives in it and this was configured as a RAID 1 or mirror set from the factory using the on-board RAID controller.  If you purchase a unit with 4 drives, it’s automatically configured as a RAID 5 array.  The big thing here is that your data is protected from the start from a single drive failure.  The drives used in the WD Sentinel are from Western Digitals RAID series drives – not the cheaper desktop drives that many low end NAS units use.

Growth Potential – whilst my unit came with 2 x 2TB drives in it, I elected to install an additional 2 drives to it.  Normally this process is painful in normal servers as you need to manually do a heap of work to make it all work.  Not so with the DX 4000.  Once I installed the additional 2 x 2TB drives, the WD Sentinel automatically commenced expanding itself onto those new drives.  In the process it also changed the RAID configuration from RAID 1 to RAID 5 which gives better performance for the unit too.  During this process, I played the average user and did nothing.  I didn’t NEED to do a thing because it handled it all.  The conversion from 2 drives in RAID 1 to 4 drives in RAID 5 took just over 24 hours which is fair enough – during this time however I didn’t really notice a thing.  This is a set and forget device in that respect for sure and I could even walk my mother through doing this remotely if I had to.

Backup – well the client PC backup is part of the WSSe environment – as such it’s a single instance storage of all the client PCs (up to 25) in your network.  It automatically will backup the PCs if they are in the network and turned on during the backup window.  Clients can restore individual folders or the entire PC if required.  To restore an entire PC is pretty darn simple – the user can easily be guided through creating a recovery USB stick via the WD DX 4000 console and then they can boot their PC off that USB and restore their machine from the most recent backup.  Very cool.  Oh – and should a backup fail for a machine, it will be displayed on the front LCD panel of the DX 4000.

Server Backup – Although WSSe includes a backup utility by default, Western Digital have elected to disable this due to inherent limitations in its design from Microsoft (basically it can’t backup more than 2TB).  What this means is that you need to look at alternate options to backup any data you have on your WD Sentinel.  Western Digital are working on some options for this now and will announce more in future.  For me however, I’m using BackupAssist to backup my DX 4000 to an external Western Digital 3TB MyBook drive.  I’ll do a separate blog post on that tomorrow to show you how BackupAssist get around the 2TB limit.

File Storage – I’m using my unit for production data and have it integrated into my SBS domain.  I’ve configured (using the WD Sentinel console) a number of shares and have copied over data from other servers in my network to centralise all my data storage on this device.  Access to the data is controlled via a group I’ve created on my SBS server and this is the easiest way to do this.  Once I’ve added members into the group permitted access to this server, I can then use the WD Sentinels console to further refine who in that group can access which shares on the sever.

Remote access – the WD Sentinel also has the inbuilt Remote Web Access application that is resident in SBS 2011 Essentials, and Windows Home Server 2011 Premium.  This isn’t needed in my particular use, but would be very useful in small offices that don’t have any other servers.  The Remote Web Access allows users to remotely access files and folders on this server using nothing more than an Internet Explorer web browser.

Media Streaming – is also another feature of this device where you can upload photos, music and other videos onto it and it will allow them to be displayed on iPads, PCs, or even your DLNA compliant TV.  In a business sense, I can see this being used for training videos and the like being shared across the network to users that need access on demand to them.

Overall, I’m very impressed with the Western Digital Sentinel DX 4000 unit.  It’s a very good implementation of Windows Storage Server 2008 R2 Essentials and I can see that there’s been a lot of thought given to redundancy of the device in many areas.  We’ve had a great deal of interest in this unit from our client base already and I think it will only continue to expand.  If you are in need of a small office server like this, I’d certainly recommend looking at it as a solution for your business needs.