I was doing an SBS 2003 to SBS 2008 Migration last week and had something very strange happened. I had a directory called Network Data that literally disappeared. Below you can see the Windows Explorer view shows no trace of the Network Data directory. I initially thought that I had some disk corruption or something else, that is until I dropped to a CMD prompt and did a DIR listing as below. You’ll notice that there is a Network Data directory. You will also notice that there is is NO Start Menu folder. I looked into both the network data folder and the Start Menu folder and found the contents to be the same. Why then was it being called Start Menu in Windows Explorer and not in a CMD prompt.

I copied over the relevant folders to the new SBS 2008 server too, and the problem still persisted as you can see below. I could not see any reason why the problem would copy over to the new server. Strange I thought, so I asked the SBS Dev team who were backing me up on this migration (we were part of the SBS 2008 TAP program where we get to run a customer on SBS 2008 well before it’s official release). He hit it on the first attempt. Inside the Network Data folder was a file called desktop.ini. I learned that the contents of this file have the ability to customise the display of not only the contents of the folder that it is in, but ALSO the folder name of the folder it is in when viewed with Windows Explorer. Ok – so when I deleted the desktop.ini file, the folder magically renamed itself to Network Data again and things were fine. 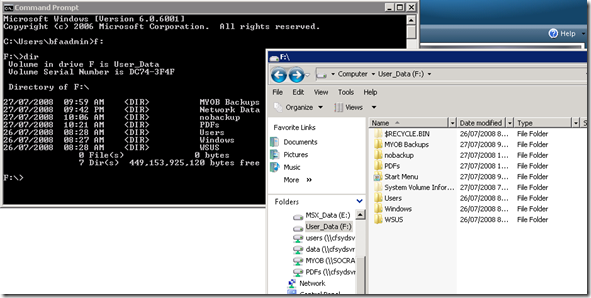 So this problem really has NOTHING to do with the SBS version or the fact I was doing a migration, it was related to a user somehow putting the file in this folder itself and could have happened anywhere / anytime.

Thanks to Adam DePue from the SBS Dev team for helping me sort this one out!