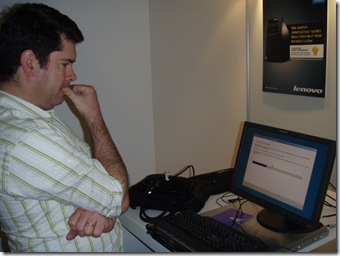 Robbie Upcroft is the Microsoft Australia Product Manager for SBS, EBS and Windows Home Server. Robbie will readily admit to all and sundry that he is the least technical person at Microsoft or so he claims. No don t get me wrong Robbie is no mans fool, I totally admire him and working with him is fantastic, but he s not a techo like most of us 🙂

I was involved in a Lenovo server launch last week at which Lenovo announced the introduction of new tower and rack mount servers to compliment their product range. As part of the launch we needed to have a server running SBS 2008 so that we could demonstrate how SBS 2008 worked on their platform and answer any questions people might have around SBS 2008. I was tasked to do the job, but then had an inspiration to suggest that Robbie could install it himself. Robbie s initial reaction was No way I can t do that . He pretty quickly came around though and before long he was installing SBS 2008 on a brand new server. The photo above showed him looking on while the install process took place. Now I ll admit I stood over his shoulder to watch, but due to the SBS 2008 setup process being so focused on asking non technical questions, it was fairly easy for him to do. 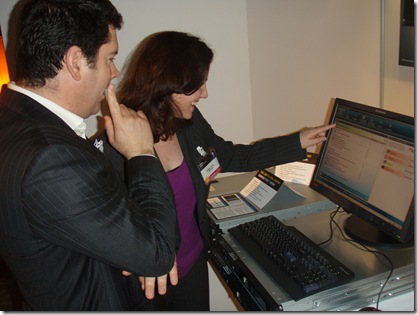 Here on the right you see the finished result as Robbie stands back looking happy with himself. Fellow Microsoft OEM Marketing Manager Melissa Dewick looks on with surprise as Robbie claims victory at the successful installation. Well done Robbie!

So if this blog post were all about Robbie installing a server then it would be pretty pointless.

My point is that SBS 2008 has been designed for a whole other market than what we resellers are thinking about. It s designed for the average Robbie to get up and running faster and easier than before. We as SMB IT Professionals need to recognised that and look to how we can add value to this scenario for our clients. How can we continue to provide great value particularly in todays tougher economic climate? How do we present ourselves to our clients to ensure that they retain our services?

As a side note I m thinking to use a Robbie scale on future blog posts to indicate how easy / hard it is to do something a Robbie score of 1 would mean you would only need 1 Robbie to do it aka fairly easy. A Robbie score of 5 would mean that it s much much harder and you need a fair amount of technical skill to do it. What do you think?