From the world of “this doesn’t bloody make sense…”…

We had configured a PPTP VPN on a server for a client.  Tested it using their user accounts and the administrator account.  Everything worked fine.  Then the client rebooted their server after installing some software and found they could not VPN into it again.  It just hung at the “Connecting…” screen.

From the servers event logs, all I could see was an error message from RasMan with event ID 20209 indicating that GRE was not getting through to it.  This didn’t make sense at all as all the client had told me was that they rebooted the server. 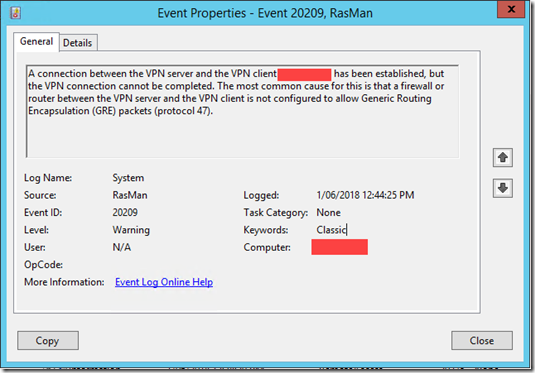 I did further testing on my laptop and found that I too had the same issue.  It would not connect.

I did some research and people suggested deleting and recreating the VPN connection.  I then found that my connection was using the clients UserID and password.  I cleared the credentials and tested as Administrator and it worked fine.  I then tested as the client and it failed with the exact same issue.

Now here’s the rub… When I tested using the VPN connection from Control Panel (White Screen below) – it failed.

However when I tested using the VPN connection from the Task Bar – it kept prompting me for credentials and this lead me to the suspicion that the client had ALSO changed their password.  I confirmed that the did change it and once they cleared the cached credentials for the connection – they are in just fine. 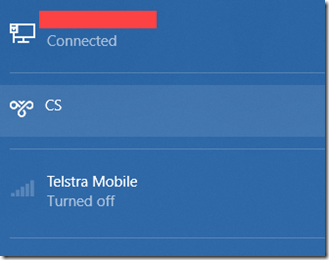 Final footnote here…. even though I saved valid credentials via the VPN connection in the WHITE screenshot above – it didn’t appear to transfer to the VPN connection I attempted to make from the BLUE screen above.  This leads me to suspect something’s buggy here.  I found however that when I saved creds from the BLUE screen, it also saved them through to the WHITE screen…. one to watch out for.

Oh – and yes – I know PPTP is NOT the way to go, but due to client specification, it’s all we can work with