Well – it’s the final day here at the Microsoft Australian Partner Conference and there has been a lot of interest in the new versions of SBS 2008 and the new EBS 2008 due out on November 12th. As one of the fun things for the event, Robbie and I are running a stand on Windows Essential Server Solutions and as part of that we’ve got a paper airplane competition running. The task – simple… make a paper airplane out of the entry form and then fly it the longest distance. Early competition had distances of 5 meters as being the longest…. however last night competition was intense with geeks thinking strategy… the leader board as at 10:30am this morning is as below with a staggering 19.0 metres out of one flight! Impressive. Whoever is on the top 10 of the leader board at noon today will go into a fly off at 1pm – the prize – a helicopter flight for two around the Great Barrier Reef! Not bad huh…. So for all those coming to the TechEd SMB Preday in September – make sure you know how to make a paper airplane fly real well!!!! 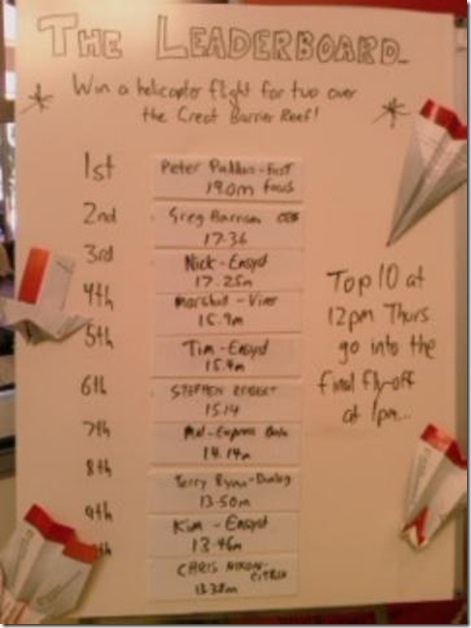