Onsite today, I was installing a brand new GSM7328S and the AX742 24GB Stacking module to link it with a 2 year old GSM7328S.  I powered down the old switch, installed the stacking module and installed everything into the rack.  Powering both switches on and they came up nicely… or so i thought.  I found that none of the ports in the older GSM7328S would work.  They would not even come up with a link light.  The newer switch was fine and it appeared to be ok.  On a hunch, I did some digging and found that Netgear have a newer firmware out available here

The very top item on the list of changes is a change to allow the older model (v1) work with the newer model (v2).

Ok – so I downloaded the new firmware and then used the web console on the older v1 to upgrade it to the newer firmware.  Seemed to go through ok, but then failed to reboot cleanly. :-(  Out with the serial cable and into a command prompt on it and it showed some form of stack exception during the reboot.  Not good.  I found this other KB from Netgear that allowed me to perform the firmware upgrade again via XMODEM.  The upgrade went through and I was then able to reboot the switch.

Unfortunately it didn’t work still.  The switch was still in a reboot mode continually cycling through the power up phase and then crashing.  I used the Netgear Switch Recovery tool to take the switch BACK to a different level of firmware.  That process was wizard driven and dead simple to follow.  30 minutes later, the switch reboots and it’s still broken… slightly different issue this time though 🙁

Hmmm… last resort – called Netgear Technical Support.  The courteous people there asked me a few questions, all up about 15 minutes and then agreed that I’d done all I could.  They are advance shipping a replacement switch and we’ll be back in action in a few days.

For the record… this is the progress of a 9MB file uploading via XMODEM at 115k… yup – those were the days alright. 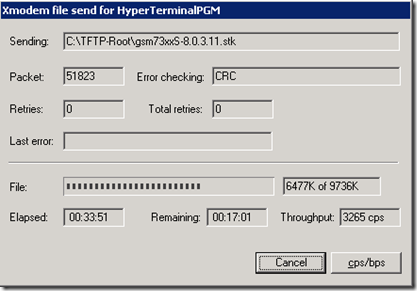