I was onsite today with a client.  While I was doing some work on a number of unrelated things, their helpdesk team leader came to me with an urgent issue.  Apparently a large number of users had suddenly gotten this window pop up on their screens from the Interactive Service Detection.  Initial user response was to panic of course, and the helpdesk team leader was understandably concerned. 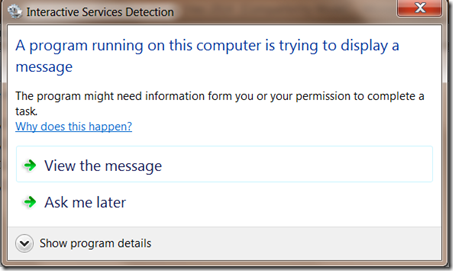 Given that I’d never heard of this before my first response was to find out what is Interactive Services Detection was and what it was doing.  Thanks to this Microsoft blog post, and this one,  I was able to find out more about this.  I selected the Show Program Details option and was able to see that MSIEXEC.EXE was “causing” the issue 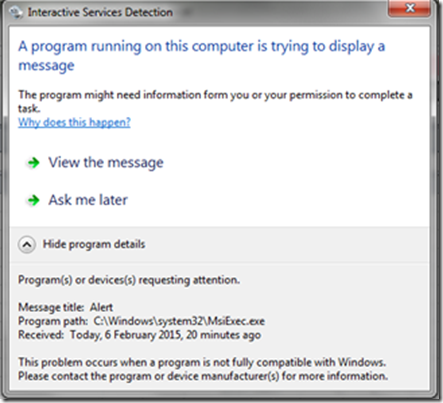 When I Selected the View The Message option, I was able to see the real error message given below (excuse the picture – its taken with my phone) 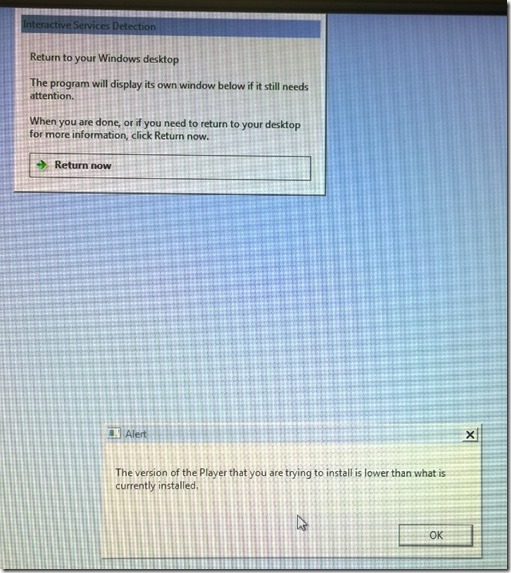 Further digging into the issue established that all computers that had this issue so far were upgraded to Adobe Flash Player yesterday, most likely via the Adobe Updater Service.

We talked to their Internal SCCM Administrator – he had in the last hour released a planned update to update everyones Adobe Flash Player to the most current version.  We developed the suspicion that the detection logic in the upgrade was flawed, and that the error message was potentially a result of the SCCM controlled update trying to overwrite the same version which was upgraded by Adobe yesterday.

At least we verified that it was not a virus, people can now sleep at night

The SCCM Admin however still has to figure out exactly what went wrong – it was not through any fault of his own as he had tested the upgrade on his systems already.

This goes to show that in the heat of the moment, it’s all too easy to jump to conclusions rather than take one step at a time to work through the problem.  Glad that the clients team let me help them through this one – we sorted out the issue in less than an hour.  BTW – Did I say I enjoy mysteries like this!