Recently HP released the 6th generation of their product line. As part of that they released the ML330 G6.  This server is focused on the mid level SMB client and includes features that are designed to answer their business requirements.  I’ve been fortunate to have one of these servers for quite a few months now as I was beta testing it for HP.  During the beta I found that the server was 100% stable with no unexpected crashes – something I’ve come to expect from HP. 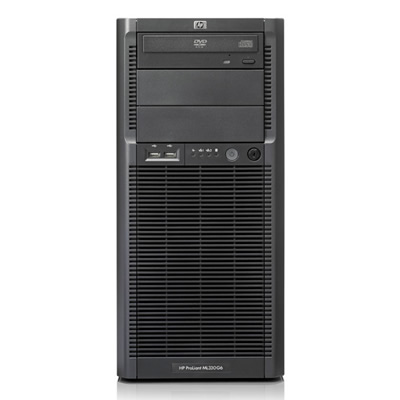 The ML330 G6 servers come with a range of CPUs all based on the Nehalem CPUs. The Nehalem CPUs are designed to cater specifically for higher workloads than previous generations CPUs.  They have some impressive performance optimisations around Virtualisation that I tested out myself with various configurations.  I loaded up the ML330 G6 with Windows Server 2008 R2 and the Hyper-V role.  I then installed SBS 2008 as a virtual machine in just over an hour. Wow that’s fast.  Whilst the system I had was in beta, I was certainly impressed with the performance and stability of the server.  OK down to the tech specs.

The ML 330 G6 supports up to 2 physical CPUs and is currently sold in speeds of 2.0Ghz up to 2.53Ghz.  There are factory configurations feature Quad Core CPUs across all models with either single or dual CPU standard which means loads of grunt for the workloads we’re likely to throw at them. What is particularly interesting here is that when you push the CPU hard for some tasks, it is designed to overclock itself a little in order to get that task done faster than before. It does this by shutting down one or two of the other cores of the CPU to ensure that it does not go over the thermal limits of the system.

Memory expansion is not something you’ll need to worry to much about. With up to 18 memory slots, you can take this system up to 144GB of DDR3 Registered RAM if you really need to.  One thing to note is that the Nehalm architecture requires that the memory configurations be balanced across the CPUs.  This means that you need to have equal amounts of RAM dedicated to each CPU.  This is one of the ways that Nehalm achieves it’s massive performance improvements over previous generations of process architecture.  You also need to keep in mind that there are two type of memory you can install into your HP G6 servers, DDR3 Registered and DDR3 Unbuffered. The two types of memory are actually incompatible memory types and you can’t mix the two.  It would seem strange then for HP to offer such configurations until you understand the logic behind it.  You can use the DDR3 Unbuffered RAM for configurations up to 24GB and it’s designed this way as a low cost method for small system configurations.  However if you are designing larger configurations with higher memory requirements then you need to consider using DDR3 Registered from the start to give you better overall growth paths.

In terms of the disk subsystem, the model I had came with an Smart Array 410 controller which is expandable to up to 512MB of Battery Backed Write Cache.  The standard server allows for up to 4 Internal Hot Pluggable or Non Hot Pluggable 3.5” SATA or SAS hard drives. There is an optional expansion chassis that will allow for a further 4 x 3.5” drives of either type if you need it.  This gives this low end system some serious potential in terms of disk capacity. The very entry level model comes with a low end Smart Array B110i controller which I’d recommend upgrading to the 410 with BBWC as soon as possible.  Whilst I’ve not tested this low end controller, I really think you will need the better disk throughput to keep up with the processing grunt this server has to offer.

Externally the server has 3 drive bays of which one is already filled with a DVD ROM as standard (about time too).  It has 8 USB Ports in total 2 on Front, 4 on Rear and 2 internal (1 for tape but I didn’t use this).  The system has 4 x PCI-Express slots internally of various configurations (x8 Gen 1, x16 Gen2 and x8 Gen 2).  The standard power supply is a 460w non hot pluggable/non redundant power supply. You can replace it with a hot pluggable unit and add a second for redundancy. This is another area that needs consideration as you have the option to “right-size” your power supply configuration therefore ensuring optimum efficiency in terms of power management.  Check out their guidance here.  There’s also the option for redundant fans in the system too if needed.

The server runs pretty quietly in my office and it will be a shame to have to give it back to them as I’ve grown somewhat attached to it. Overall I am impressed with the ML330 G6 server. It seems to have a fair degree of expandability without the high cost normally associated with it. My one down side (and this is common across most name brand servers right now) is that I’d like to see them have a couple of ESata ports on the rear for things like external disk backup devices. Given the world is moving this way I can only hope that the G7 series will accommodate this request as a standard feature.

You can find out more about the ML330 G6 here or buy one from my company here if you so desire.