Too often in the busy world we live in, we forget the simple things in life.  Simple things include saying a heartfelt “Thank You” for something that has been done for you makes so much difference to a persons day.

I recently helped a friends father out – he was about to purchase a copy of Windows XP from a local computer market as he needed it for his older computer.  He called me because it looked a little shonky (Aussie term for “not right”).  I suggested he not buy it, and as I had a couple of copies here given to me by a Microsoft person many years ago, that were fully legitimate, I’d be happy to give him a copy.  He offered to pay for it but given it was given to me, I really wouldn’t accept payment.

So he came over – I gave him a copy of Windows XP and he said thank you.  He really meant it and it felt good.  What I didn’t expect however was that the next time we met a few months later, he had a small gift for me.  The gift was the very cool custom made pen you can see below.  What is even cooler is that Ken made this for me himself.  This simple Thank you made a massive difference to my day.  Thanks Ken – you didn’t need to do this but I love it – Thank You.

Now – as a thank you to Ken – I’ve found out that he’s trying to start a new business making these custom pens.  If you are interested in having a custom pen made for you like this one – send him an email HERE and have a chat to him. 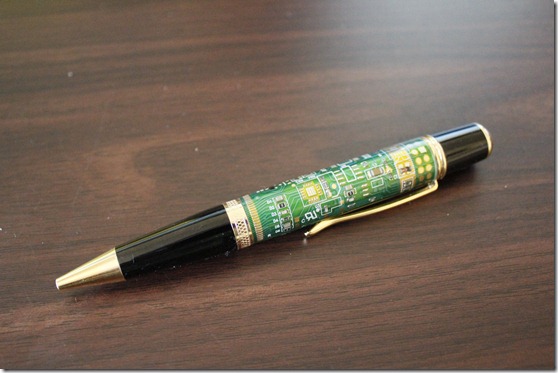 So – my question to you is… Have you said Thank You today or had someone else do it?