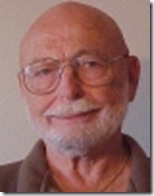 Via Facebook this morning, I received an email from someone I did not know

“Frank had a massive heart attack last Wednesday and passed away this morning at 1:50.”

My first thought was who is this person sending me an email about someone called Frank I checked their friends and it showed one person. Frank McCallister. No I thought it can t be so. I checked with the other SBS MVPs and found that yes sadly it was. Frank McCallister passed away last night after a heart attack earlier in the week.

Frank shared once with me some of his experiences as a test fighter pilot. I figure he must have been a damn good pilot to have live such a long life. Frank contributed to the community via a number of SBS focused newsgroups and mailing lists and helped thousands of people in his time. He seldom asked for help in return.

Frank you will be missed. May you rest in peace.

KevinW just blogged this in honour of Frank http://msmvps.com/blogs/kwsupport/archive/2009/02/27/frank-mccallister-in-memoriam.aspx