My laptop is the subject of a lot of different software.  I use it every day to do many things and often trial software on it.  Over the last few weeks maybe more, however I have noticed a problem with it.  I’ve noticed that the icons on my desktop simply stop responding… everything else works, but you can’t select or click on anything on my desktop.  At first I suspected one of the guys in the office had replaced my background with a picture of my desktop and it’s icons, but a quick check confirmed that this was not the case.  How did I troubleshoot this problem?

Well first off I rebooted.  I checked to see if the problem was there and it was not.  Everything worked fine.  Ok – so I wondered what was causing it and went about my doing my work.  It was not long before I had several applications open, Outlook, Internet Explorer, Word, PowerPoint etc. – all working fine.  I then went to minimise things to get to an icon on my desktop and found it was broken.  Ok – so I know something I did in the last 15-20mins broke it.

I checked my system for malware using Trend WFBS which I’ve got installed on this machine, and also MalwareBytes – both came back clean – so I figured I was safe there.  I rebooted again and of course everything was fine.  I noted down the apps I had run and did my work for 15-20 minutes – I was focused on Outlook for this entire time and I noticed that everything worked fine – including my desktop icons.  I figured I could rule out Outlook.  I then needed to do some testing for a client, so I opened up Internet Explorer and began testing their OWA (they had reported some issues).  I remoted into their systems and fixed up the issues and at the end closed Internet Explorer.  I want back to Outlook and then to my desktop at which point I noticed the desktop icons would not respond… ahhh – ok – so maybe it was something to do with Internet Explorer I thought.  I opened up task manager and even though I’d closed Internet Explorer earlier, I found it was still running in task manager.  I end tasked it and suddenly my desktop icons responded again.  Interesting I thought.

So far I had a suspicion, that IE was causing the problem, but I had to prove it.  So I rebooted again (notice that I try to do this so that I’m starting with a known clean base when troubleshooting).  This time I used just Internet Explorer and accessed a few news sites, my own SBSfaq.com and the like.  I then minimised IE and found that my desktop icons were in fact not responding at all.  I closed IE and again noticed it was still running in task manager after it had gone.  End task on iexplore.exe and desktop worked again – ok – so it’s something in IE causing the issue.

IE 9 started up and ran without an issue.  I surfed a few sites and then closed it.  I checked Task Manager and iexplore.exe was gone as it should be.  My desktop icons worked fine too.  That to me confirmed that there was likely an add-on in IE that caused the problem.

I then went about eliminating which add-on was causing the problem.  You can manage add-ons from the Internet Options menu and the Programs tab as below. 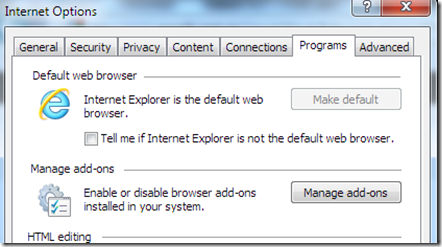 I listed all the add-ons and looked for the most recent dated ones first.  They turned out to be the Skype Update that was updated a few weeks ago now.  I disabled them and voila – the problem was gone!

I did some other testing by disabling all the other addons EXECEPT the Skype ones and the problem came back – so I was pretty certain that the Skype add-ons in my Internet Explorer was indeed causing my desktop icons to stop responding.  For the moment, I’ll leave them disabled as there does not seem to be an update available for them.

I wonder how many others have seen this issue?